There are 3 main types of fire alarm systems we install. Conventional, addressable and wireless.

Conventional fire alarm Systems
A number of detectors are wired into a zone on the fire alarm control panel. All these detectors would be in a specific area ie a floor of a building. So if you had a building with 4 floors then (depending on the size) each zone could represent a floor. If a detector is activated then you would know by looking at the control panel which floor has the activation.

Addressable fire alarm Systems
Addressable systems are much like conventional only the control panel will tell you the exact device that has activated. So if a fire broke out in a hotel room, you would know exactly which room it is.

Below are some common parts found in Fire Alarm Systems.

Fire Panels
The fire panel we install on jobs greatly depend on what type of system is required. We can install all sizes of conventional and addressable fire alarm panels. We mostly install fire panels manufactured by Ctec who are known for relaibale & cost effective systems.

Detectors
The vast majority of detectors we install are manufactured by Apollo. Apollo are one of the most recognised fire manufacturers in the world and have a reputation for supplying high quality and reliable detectors and other fire safety devices.

Please contact us if you have any questions regarding our Fire Alarm services in Glasgow. 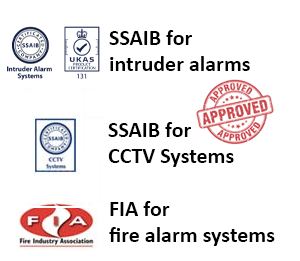 Use our simple online form to book your FREE no obligation on site security survey.